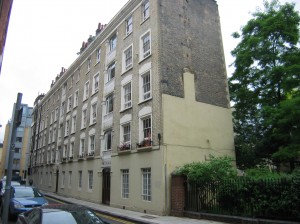 This stunning converted listed Victorian Mansion is situated right in the heart of Shoreditch. There is not much history to be found about this particular building but there used to be a lot of workhouses around this part of Shoreditch.

By 1776 over 16,000 individual men, women and children were housed in one of the eighty workhouses in metropolitan London; that represented around 1-2% of the population of London. Workhouses, institutions in which the poor were housed, fed and set to work, had by this time become the most common form of relief available to Londoners. Most workhouses were established in the expectation that the adult, able bodied and male poor would form the majority of the workhouse population. The hope was that the labour of such paupers could be disciplined to help subsidize the cost of the house. But within just a few years of opening, these houses were almost universally forced to restrict or even abandon work undertaken by the inmates, and to refocus their efforts on the care of the ill, the orphaned and the elderly.

Most properties within the Victoria Chambers still boast some original features and have generally been refurbished to a good standard. Flats have one bathroom, and in some the kitchen is separate from the reception. All apartments within have however, one thing in common: the large original-style windows, which flood rooms with natural daylight.

The building also benefits from the use of a token operated washing machine/tumble dryer in the communal basement beneath the building and a spacious communal roof terrace for residents to enjoy!

View Base Featured Developments in a larger map

The development is enviably located centrally, on the junction of residential roads Paul Street and Luke Street, a short walk from Liverpool Street, Old Street and Moorgate Tube Stations. Residents can enjoy easy access to the vibrant areas of Shoreditch and Hoxton within minutes! The local area offers an excellent selection of amenities and the shops, bars and restaurants of Shoreditch and the City are within close proximity. The nearest public transport link is Liverpool Street Station, (London Underground Central Line, Circle Line, Metropolitan Line, Hammersmith & City Line and National Rail).