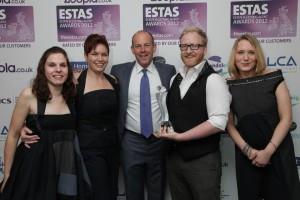 This year, base property specialists have been nominated for not one, but two Estate & Letting Agent Awards or ESTAS, and we are thrilled! Again, baseps rival nine other agencies in a bid to win Best Letting Agent in London (North) as voted by landlords. Our team is equally delighted by the nomination for Best Letting Agent in the UK as elected by Tenants- since our launch, we have always pioneered top service standards to Tenants as well as for paying Landlord clients. We are one of just four London agencies to have made the shortlist! 2015 is the 5th consecutive year in which base has been shortlisted in the respected awards, and the team are feeling the excitement! In the ESTAS 2012, we were awarded gold in Best Letting Agent in London North, rated by landlords, and were awarded bronze in the same category in 2013.

What is The ESTAS?

The ESTAS is not just a prestigious awards ceremony; it is a customer service scheme to professionals in the residential property industry. In fact, they are the only Property Industry Awards in the UK based exclusively on client feedback and votes and NOT on the opinions of professionals working within the sector.

So how are the awards themselves determined? Data is collected through customer feedback, voting and questionnaires and a final score awarded based on the average score voted and the volume of votes received- highest score wins!

Why base has seen five years of nominations

At base property specialists our team work hard to ensure that customers are fully satisfied with our services, and in return, we receive such fantastic feedback. Our focus is on excellent customer service and we provide a wide range of additional property services, including interior design and property maintenance, meaning base offer a great deal more than your average London estate agent.

Another year of awards
To add to the celebration, this year marks The ESTAS 12th annual ceremony, which will take place on Friday the 17th of April at the Hilton Park Lane in London. If you’re an attending member, then suit up, polish your shoes, and get ready for a night of entertainment and delicious food. Personality and television presenter, Phil Spencer, will host the event and present the trophies to the best agencies for an audience of around 700.

We would like to thank everyone who has used our services, supported us, and for all the people who took the time to vote for us- we literally would not be here without you.