Spitalfields: The Weird & The Wonderful 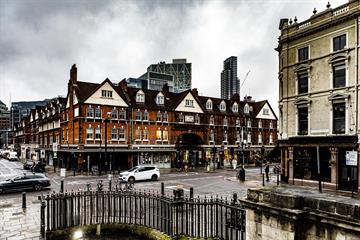 Spitalfields was very rural until the Great Fire of London. By 1666, traders had started to operate beyond the city gates. In more recent history, we know it as a place for social disturbance and culture. Naturally, the area became home for different cultures & immigrants arriving in London from as early as the seventeenth century. The name, Spitalfields, comes from the Priory of St Mary Spittel (a shortening of hospital) founded in 1197. Parts of its charnel house (where bones were kept) were discovered in 1999 and you can view the remains under a glass pavement slab near the market- tasty! Let’s take a look at some other weird and wonderful historic places in Spitalfields.

Dating back to the 1780s, this building has been home to many crowds, such as diamond cutters, boot makers & so much else. However, one owner of this shop seems to have left their mark. Now a cafe, the shop front still shows the name of Amelie Gold, a Hungarian Jew who lived here practising hat-making in the 1880s. Impressive.

In eighteenth and nineteenth century London, you would often spot such plaques dotted around buildings (some even dating from the 1700s). These were mainly used by fire insurance companies to mark houses that had paid for their insurances. Back then, there was no national fire service. Residents had no choice but to pay a premium to ensure they would be helped in an emergency, given that they had the funds to cover this. This didn’t necessarily mean you were safeguarded even then. If the wrong company happened to arrive first, they'd refuse to help you if they spotted a competitors plaque on your building.

Spitalfields was once home to the weaving industry and had a huge hub of this kind. This small street name (situated just behind Commercial Road) is an acknowledgement to that practice. Textile engineers would stretch out wrung woven cloth on to frames (also known as ‘tenters’) until they were taut. Then, the engineer would leave them to dry outside. This allowed the material to dry evenly, without the risk of shrinkage. Cool fact- It’s where we get the phrase ‘on tenterhooks’ from.

You’ll now know this building as another block of student accommodation, however, it has quite a past. This building used to be a shelter, built purposely for the poor. The shelter was originally built in 1868 and was used for purpose until the 1970s. It is estimated that this shelter helped over 300 women and children and 50 men. You can still see the separate entrance signs for men or women and children above the doors. It is echoed that J Kelly (the fifth official victim of Jack the Ripper) was housed here in 1884 when she first arrived in London.

Back in the nineteenth century, the Jewish population of Spitalfields boomed and the surrounding area's population was unquestionably rising. On Brune Street, you can find an old Soup Kitchen. This kitchen originally opened in 1902. It was one of many charity kitchens for the Jewish poor in the East End. At the kitchen's peak, it provided meals for over 5,000 people a week! Sadly, the charity closed down in 1992 but the building still has its distinctive design & signage. Be sure to keep an eye out, as it is one of those buildings you’ll casually stroll past without actually paying it any mind. If you do happen to spot the building and you’re puzzled by the figure 5662, it's the year 1902 in the Jewish calendar.

6 Reasons To Live in Shoreditch
Landlords: What Attracts & Keeps Long Term Tenants?
Supplier Spotlight- Insights Into LeadPro's Journey
4 Tips To Increase The Chances Of Selling Your London Home
Tenants: Acing A Summer Property Search
Meet the team: Getting to know Terence, Head of Property Management.
Landlords: 5 Reasons a Full Management Service Is For You
Our Top 4 Tips For First Time Renters in London