From the inside looking out: How my first industry event shaped my perception. 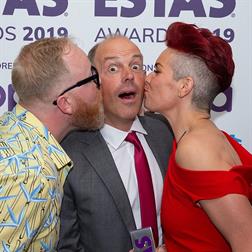 Base have recently employed a new member of staff who, alike with myself, had no property experience. One of the things he asked me when applying for the job was ‘isn’t the property industry fairly vicious, though?’ Naturally, my reaction was ‘Absolutely not!’ which got me thinking back to how I felt when I first began my journey.  Now, I had been at base less than one month before the team were taken to the ESTA’S 2018, with a fairly warped idea of the property sector. I was a complete newbie to the industry and still hadn’t made up my mind whether this role was going to be right for me. I was hired with zero property experience, having recently thrown in the towel at my waitressing job, in search of a new challenge.

Now, for those of you that don’t know, the ESTA’s is an annual awards ceremony, focused on celebrating agents & suppliers (both independent and corporate) who put customer service at the heart of their business.  Each branch entry are voted for by their clients and these are awarded accordingly to each category on the day.

The tables were filled with a mixture of agents and suppliers, both independent and corporate. Whilst I had absolutely no idea of most of the terminology being thrown about in the conversation on our table, one thing was easy to recognise: the passion in the atmosphere. As a total rookie, this really opened my eyes to how many people cared about the industry, how many people were there to support and celebrate one another’s achievements, even if they didn’t win an award.

How wrong my preconceived ideas felt! In an industry that is often painted as dog eat dog by the media, this was a really positive first encounter. I instantly discovered a newfound respect for my fellow colleagues and my ideas on ‘property professionals’ altered. Albeit, I was still slightly concerned that my new boss ventured out in a full swing Viking outfit (all in the name of charity, of course).

Fortunately, at the 2019 ESTA’s I was much more clued up on what would be happening & more importantly, knew what people were talking about (debatable)! It also felt amazing to have actually contributed to this year’s awards won. We walked away with some impressive feats - two more kisses planted on Phil Spencer’s cheeks and more importantly, 3 more shiny awards including a UK Grand Prix Award for the fourth consecutive year! Woohoo!

Now, it is no secret that I am a huge fan of what An & Kristjan have built together, from the team I get to work with every day to the clients I genuinely enjoy picking up the phone to.  However, being part of a small independent that prevails year after year on nothing but hard work & client satisfaction is really something. Equally, I now recognise that there are many businesses that just want to do the right thing. There are many businesses in the property sector that focus on ‘doing the right thing’ rather than just ‘doing’.

It is fair to say that over the last year and a half, I have seen a lot of media coverage on all of the above on what agents do NOT do, rather than the good stories. So, let’s dedicate this blog post to all of the property professionals who have their client’s best interests at heart and want to make for a better reputation in the property sector. So without further ado, ESTA’S - See you next year!

6 Reasons To Live in Shoreditch
Landlords: What Attracts & Keeps Long Term Tenants?
Supplier Spotlight- Insights Into LeadPro's Journey
4 Tips To Increase The Chances Of Selling Your London Home
Tenants: Acing A Summer Property Search
Meet the team: Getting to know Terence, Head of Property Management.
Landlords: 5 Reasons a Full Management Service Is For You
Our Top 4 Tips For First Time Renters in London