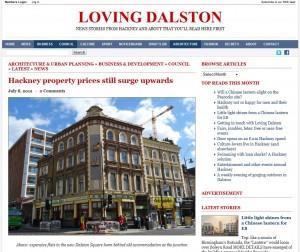 LovingDalston.co.uk once again asked us to comment on the latest property news, with Kristjan giving his views of the rising Hackney property prices:

Asked about the Hackney property market, Kristjan Byfield, a founder of Shoreditch letting agent Base Property Specialists, told Loving Dalston that the boost was caused by several factors, including the growing popularity of prime areas such as Shoreditch, where demand and value continue to climb.

“The area profile has also been raised enormously by the Olympics and the regeneration programme, making it attractive both for residential home-occupiers and international investors.

The uncertainty around the euro has also seen vast sums of money invested in the London property market, and Hackney was a target area for many.” Byfield warned, however, that there were questions over what was next for the market. Prices in many parts of London were now higher than the peak of the property market in 2007 before the crash, despite mortgages still being harder to get than before.

He said: “In the short term, up to five years, I think the East London property market faces turbulence.” After the 2012 summer Olympics, a large volume of both sales and rental property was likely to be put on the market.

“Thousands of flats will hit the market in proximity to one another, reversing the current situation of demand outstripping supply,” he said. “This will cause a short-term drop as we wait for the market to take up the slack.”

City observers were predicting that rates would climb early next year. “My concern is that this will cause a second, much more severe, property crash as defaults climb, repossessions hit, and mortgage rates rise, becoming unaffordable for many more buyers.

“However, these two short-term incidents aside, I believe that East London has one of the strongest long-term outlooks of any part of the property market in the UK. With improved transport infrastructure, the Olympic Park becoming an established public space, the completion of Crossrail and much regeneration yet to be completed, the potential growth and security in Hackney for the foreseeable future is great.”

This is Money - Call for radical reform to business rates
The Times - 10 Things You Need to Know about Buy-To-Let
Daily Mail - Investors opt for buy-to-let
Mortgage Solutions - Buy-to-let lending grows to 13.4%
My Finances - Repossession figures stable in Q1
The Guardian - Best practice exchange: Efficiency
The Telegraph - Buy-to-Let investments on the rise
The Telegraph - How to become a buy-to-let landlord
Archives