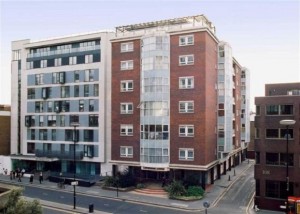 The Cathedral Lodge was designed by Emberton Franck Tardrew but converted to flats by Barratt Homes in 1995.

The Cathedral Lodge was not originally built for flats, but instead for a clothing factory and was previously called Steinberg House. Emberton Franck Tardrew originally designed the building for Steinberg & Sons in 1963 – 1964. Due to the building’s appearance, Catherdral Lodge was mistakenly viewed as a hotel by many estate agents. It was converted to the flats they we see today by Barratt Homes in 1995. The seven-story building contains 50 flats with concierge service.

Cathedral Lodge is a modern development with 50 one and two bedroom apartments. Despite its central location, apartments are quiet due to the double-glazing. The apartments within are spacious and light with large reception rooms and separate kitchens with space for a Breakfast bar or small table. Bedrooms are good-size doubles, and apartments with two bedrooms boast an en-suite shower room, as well as a separate full bathroom. There is good storage space within apartments, with many bedrooms containing built-in wardrobes.

Residents benefit from a communal roof terrace with seating and stunning views of the City skyline as well as the surrounding area. The development also benefits from Concierge and secure Residents parking.

The development is situated just a short walk from Barbican tube station and is also in very close proximity to Moorgate, Old Street, Farringdon and St Pauls, so it provides easy access to a number of Stations. The immediate area benefits greatly from the Barbican Centre, which is Europe’s largest arts centre and comprises a concert hall, two theatres, three cinemas, two art galleries, a library and an extensive shopping area.

There are also a large number of schools situated within under half a mile of the apartment block, including the high profile Italia Conti Academy of Theatre Art, the City of London School for girls, and the Charterhouse Square School, making this a great area for young professional couples who want to start a family. The area around St Paul’s has recently undergone a large redevelopment and there is now a huge shopping and entertainment complex called ‘One new change’ with cafes and restaurants all within a short walk. This complex is open throughout the weekend when the rest of the area can be quite quiet.